No.4 My last chance

Refugees who face a terrifying journey to seek life over death deserve praise for their courage. This came to me powerfully in recent weeks when I met so many travelling the Balkan route to find asylum in Europe. And especially when I listened to Qusai, who needed an extra dose of courage to make the risky choices he did, despite his unique vulnerability.

I met Qusai in early February. He was sitting at the window of his prefabricated house in a reception centre in Athens, so he could see what was going on outside. I sat with him for two hours and listened to his story, told with such meticulous detail that I barely needed to ask any questions.

The story of Qusai, aged 27, starts in Damascus, a place he would rather not have lived, even before the war. Severely disabled by a condition called Osteogenesis Imperfecta, he always felt his country could not offer him the specialised services and opportunities he needed to live life to the full.

He began: “My life in Syria was difficult before the war and, after the war, it was worse.”

Wheelchair-bound, Qusai lived in fear of the bombs, especially when he was home alone and virtually helpless, unable to move.

The frequent power cuts that became part of life in wartime made Qusai even more miserable. “With the war, there was no electricity for 18 hours at a stretch sometimes. I am always indoors so my life depends on computers and phones for contact with the outside world.”

When he did have Internet access, Qusai took to writing against both the Syrian regime and Islamic extremists on Facebook, “I criticized both sides”. Soon he was receiving explicitly threatening messages on his Facebook account and through people he knew. Rattled, he deactivated his account and lay low, “I tried to hide myself”.

When Qusai decided to leave Syria, he went to ask for a passport. He smiles bitterly as he recalls the “irony” of the answer he got: “I was told I was restricted from travelling outside the country, because I hadn’t finished my military papers, so I needed to go to the military. I went from place to place for the medical examination to be exempted. And finally, I got my papers and passport.”

Qusai went first to Lebanon with two relatives and from there to Turkey, where his sister lives. But soon he was deeply frustrated again: “No study, no work, no healthcare, no possibility to go out – I faced the same problems like in Syria.”

In Turkey, Qusai tried hard to apply for resettlement to a third country through UNHCR. But his efforts proved futile. “I was told I must wait because they were studying my case. And then came the call to tell me they couldn’t do anything for me. I put down the phone and told myself: There is no hope for me anymore. And I started to think about travelling by sea to Greece.”

Clearly Qusai could not travel without someone to look after him every step of the way. Luckily, he met Ahmed. “A friend told me about Ahmed, who came from Damascus, and wanted to travel too. One day, in late October 2015, he called and said, ‘I want to cross the sea tomorrow, do you want to come?’ I was shocked but replied: ‘OK, I am ready.’”

The next day, a determined Qusai met Ahmed for the first time at the bus station. His face breaks into a wide smile as he remembers their meeting: “We started to get to know each other on the bus, 16 hours from Istanbul to Izmir.”

Qusai paid $2000, all he had, for 19-year-old Ahmed and himself, “just to cross the sea”. He explained to me: “I promised myself that I would pay the journey of the person who helped me cross the sea, it would be like returning the favour.”

Together with some 45 people, they were taken to an isolated place on the Turkish coast, and ordered to wait for the ‘boss’. Qusai paints a descriptive portrait of the smuggler: “The boss came in a big four-wheel drive. He was very proud, like he’s from a movie or something. He had a gun at his waist; he wore sunglasses and a leather jacket, and smoked a cigar. All his men had guns.”

Qusai said the ‘boss’ assured the refugees: “We care for your lives so much. This boat is made in Italy, it is a very good one, because I care for you.” And then he ordered that Qusai’s wheelchair be thrown in the sea because Qusai could not pay for its place.

Contemplating the “terrifying” black waves as the dark fell, Qusai’s thoughts were sombre: “I wondered what would happen to me if the boat capsized in the freezing water. I thought, maybe I’ll make it, maybe not. I don’t care, this is my last chance, no way back, no need to be scared.”

Qusai survived the journey… just. “It was a disaster,” he says grimly. Before they even took off, his left arm was broken when a woman fell against him in the boat. Due to his diminutive size, he was swamped by waves, and could barely breathe in the overcrowded space.

His new friend did his best for Qusai: “Ahmed shouted at the others to be careful and tried to get them out of my way and to create space for me. After one hour, the water was up to my chest. I can’t tell you how cold it was; it went into my bones. Ahmed started to tap my face because I was losing consciousness.”

After three and a half hours, much of which was spent going round in circles, the boat reached the Greek island of Nera and limped to the shore unseen. That was when Qusai’s brittle bones snapped again. “One of the men carrying me over the rocks slipped and I fell, breaking my leg in two places. I screamed very loud. They laid me on the rocks and covered me with life jackets to warm me up.”

The other refugees set off, but Ahmed and Qusai sat on the beach for hours, waiting and hoping to be rescued. Although he was dizzy with pain and cold, Qusai was in high spirits. “We were chatting like normal. ‘Are you OK?’ ‘We did it!’ And we’d start to laugh.”

Eventually a police car appeared. “All I could say was, ‘I want a wheelchair’.” To their immense surprise, the policeman returned shortly afterwards with one. So they left the beach, Ahmed pushing Qusai along.

Qusai breaks off his story to tell me: “You’ll laugh when I tell you where the policeman found the wheelchair.” This he discovered hours later, when he and Ahmed finally caught up with some other refugees near a restaurant, and one of them came to ask for his elderly mother’s wheelchair back. From then until the end of his journey, Qusai was carried around in a plastic chair.

Just when Qusai could take no more, the restaurant owner approached him. “Eleni was her name. She started to ask me questions in English. She saw my clothes wet with seawater and vomit and invited me to her house to take a shower. She gave me new clothes and food.”

Qusai becomes moved as he continues: “Ahmed and I had no money for the ferry to mainland Greece. We needed 50 euro each. Until now, I cannot believe what happened. Eleni gave me 100 euro. I started to cry, I hugged her, and she started to cry too. It was like a miracle. To this day, I am still in touch with her.”

And so they reached Piraeus Port in Athens, Qusai, Ahmed and the plastic chair. And there they found help from another source: Qusai’s online community of friends from around the world, who were anxiously following his journey from Turkey. Some Greek friends asked a doctor to look out for Qusai in Athens. Armed with Qusai’s photo, the doctor did indeed find him and took him to a reception centre, which is run by the Greek authorities and where “the people are wonderful”.

Qusai and Ahmed applied first for asylum in Greece and then for relocation to another European Union country, naming a particular one where Qusai’s uncle lives. The system worked unusually fast. A few weeks after I interviewed him, an overjoyed Qusai told me he had been accepted, and was due to travel to his new home shortly.

It is difficult to know how to end this story, which touches me every time I remember Qusai’s suffering, his courage, his unforgettable personality, and the goodness of Ahmed, Eleni and his online friends. I’ll end with what Qusai expressed as his life vision, which he was prepared to die for and will now hopefully become his reality: “To live peacefully, to continue my studies, to work and to depend on myself. I want to see my future.” 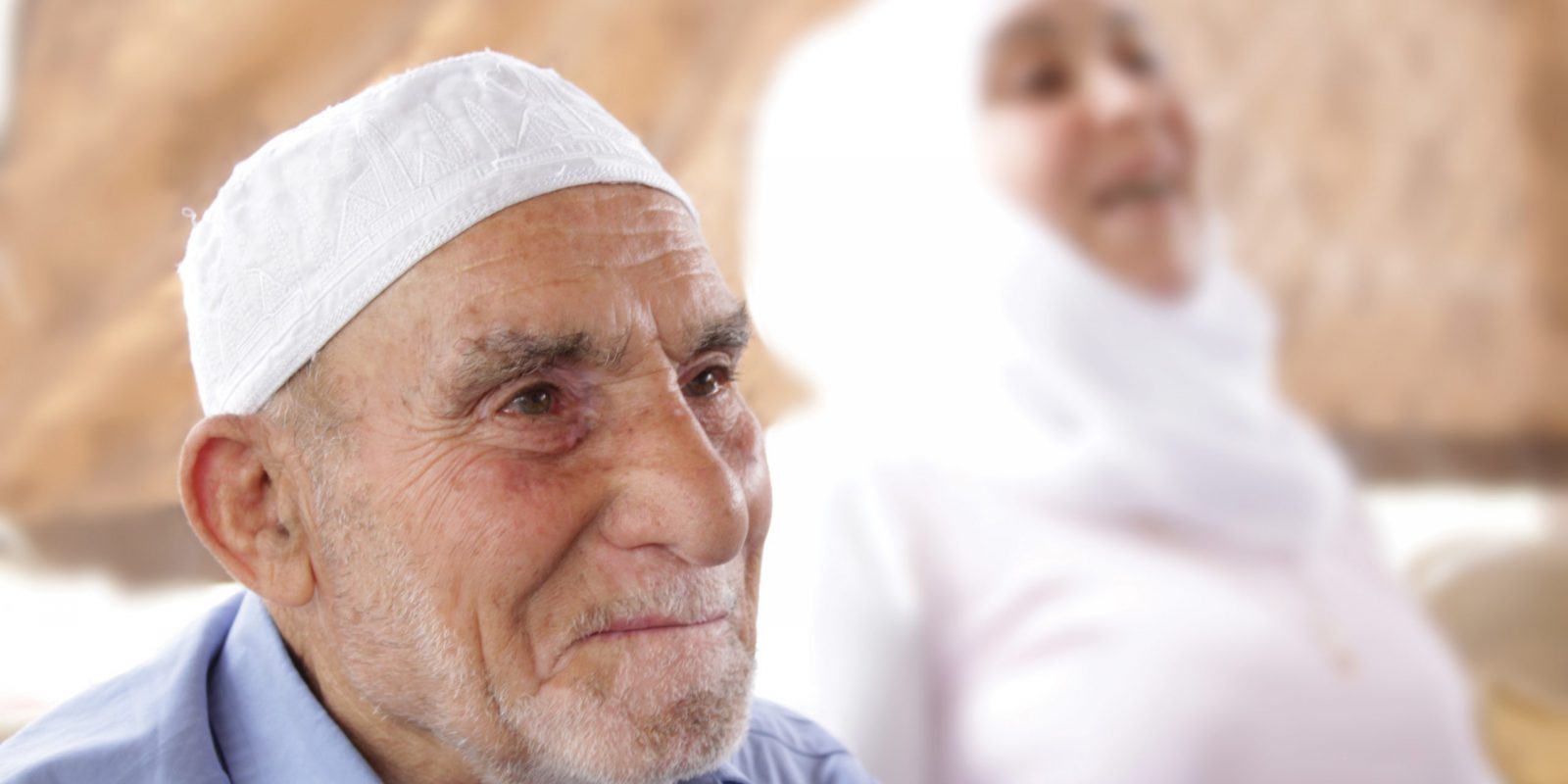