The photo was no bigger than the palm of my hand, the formal portrait of an Afghan family of seven. The distraught father took the photo from his wallet with shaking fingers, and placed it in my hands together with his wife’s ID card.

Only the man and one of his sons, aged about eight, made it to Serbia, where I met them at a transit centre on their way further into Europe. The others got lost at a lethal pass of the journey to seek refuge: the Iranian-Turkish border, reputedly dangerous because of the mountainous terrain, the weather and the risk of being intercepted by border guards.

“I was walking with my family and the guards started shooting from both sides. We were stuck. I grabbed my son’s hand and ran, and the others went somewhere else to escape. Now I don’t know where my family is,” the man said.

Did you try to search for them? “I couldn’t! If I moved, the guards would shoot. And then we had to keep running: the smuggler had a stick and a knife, he was hitting me, to make sure I don’t stop.”

He asks helplessly: “Is there anyone who can bring my family back?”

Then his son speaks up, fighting back tears, and gravely names each one of his missing brothers and sisters, counting off his fingers: “Ali, Mohammed, Farzona, Mortaza… four and, with my mother, five.”

The forlorn pair has kept travelling with the rest of their group, carrying with them only their shock, sense of loss and fading hope.

Only God knows how many families have faced such a heart-breaking predicament on their desperate journey to find a safer place than that allotted to them by fate. Nowadays, the route that most refugees are taking into Europe – from Greece onwards – is packed with parents, children and grandparents.

That parents are doing this for their children is beyond doubt; their sacrifices and dreams are for them. But refugees must resort to such risky means to travel that their bid to save their family often leads to loss instead, temporarily or – tragically – permanently.

Reza, an Iranian refugee who is a translator on the Greek island of Lesbos, will never forget a woman he tried to help just after she landed. “I saw her stomach swelling fast and shouted that we had to get her to hospital. All the way there, I held her in my arms. She was begging me, not for herself, but to look after her daughter. The next day, I went to ask her family how she was. She hadn’t made it.”

So perilous is the journey that many men choose to go alone, to try to pave a safer way for their family to follow – a brave plan that may be foiled by stringent family reunification policies in Europe.

Mohammed comes from Erbin, a besieged zone east of Damascus. First he left for the capital but then quit Syria altogether after army Intelligence came twice to look for his brother. That was the last straw.

“I left my wife and children with my mother. I miss them so much,” he says when we meet at the transit centre in Slavonski Brod in Croatia. “Now I heard it will take two years for family to be allowed to come – I can’t stay alone for two years.” Mohammed can no longer talk now. He blinks away tears, looks away and draws hard on his cigarette.

Nour’s husband fled the Syrian city of Aleppo five months ago after receiving a threat, “a paper that was so dangerous”. He went to Germany but Nour did not wait to follow him through legal channels. Eight months pregnant, she set off for Greece with her father and brother because, as she keeps saying, “I couldn’t stand it alone in Syria anymore”. Nour’s daughter, aged one year and a half, clings to her. “My baby needs her father, she is always calling, daddy, daddy. And I miss him so much, so much, I am waiting for the moment to meet him.”

Nour left for the journey undeterred by the fear that she may give birth on the road. I meet her in Slavonski Brod. “I am so, so tired,” she says. “We have been on the road for 10 days.” The worst part was being stuck on the Greek side of the border with Macedonia, due to a strike by Macedonian taxi drivers. At least 80 buses packed with refugees waited at a petrol station for days for the border to open.

“I stayed seven days in the bus, I was so cold, and we had very little food,” recalls Nour. I last see her waiting patiently for her relatives in the “tracing corner” of a big tent. Despite her ordeal, Nour smiles often. She says philosophically: “It is difficult everywhere: in Syria and here.”

Many young men voluntarily assume the obligation of going ahead to Europe not only for their wives and children but also for their parents and siblings. Amir comes from Ghazni in Afghanistan. “I’m so worried about my family, they are alone and in hiding from the Taliban. My father is 78 and I am the eldest, I must take care of my parents, brothers and sisters. I have come to Europe to save them, do you get this?”

Amir’s father worked as a pharmacist and doctor for the Afghan government for more than 40 years – a crime in the eyes of the Taliban. A year ago, the elderly man received death threats. Amir left shortly afterwards, worked in Iran to raise money for his journey, and then headed for Greece. “I need to build my life in Europe and then bring my family.” They are constantly in touch: “Everywhere I have Wi-Fi, I call them, just to say I am here. They are so happy, they cry every time.”

There is so much raw pain at leaving loved ones and country behind. Many did try to stick it out back home but then the breaking point came: bombs falling too often and too close; threats intensified or even made good…

“I love my country, but I love my life and my future as well,” says Hamid, who was stabbed because he worked as a translator for foreign NGOs in Afghanistan – another “crime”.

Many tried to find refuge somewhere not so far from home. Some Afghans went to Iran but found it inhospitable to say the least. Countless Syrians moved from place to place in their war-torn country but “now there are no more solutions for us”, says Hassan, a Palestinian from Damascus.

“For five years, we went from one place to another. A month would pass, more fighting, more planes flying low and shooting, so we’d have to move again. We are so tired in Syria now.”

For how long can parents like Hassan bear to have their family live amid destruction and death? “I didn’t leave Syria before because I couldn’t afford to,” he continues. “I’ve been thinking of leaving for three years. I tried and tried and tried but I didn’t manage. I begged friends abroad to send me money. It cost us 3000 euro to come to Greece.”

The foremost aim of their journey is humble: to be in a safe and peaceful place. One man, who came from ISIS territory in Syria, said: “What do I hope for? Nothing! Just that one, two, three – he points to himself, his wife and little child – are together and safe, that’s all.”

As the refugees make their way swiftly from one European country to another, en route to their intended destination, personnel in transit centres try to keep them safe and to help them, especially the families and the vulnerable.

The refugees are full of praise for them. Take Mohammed: “I need to say thank you to everyone who works in the centres, they clear after us, they smile, they give food, they are very kind and ready to help.”

Among the refugees too, solidarity is not in short supply. They travel in groups, sometimes made up along the way. They look out, wait and worry for each other. The natural leaders and those who speak English guide the rest.

“I am helping three families and four others I met on the way, all from Afghanistan,” says Amir. “Everywhere we go, I get tickets, information and food for them, I try to solve any problem they have because they don’t know the language, and it’s so hard.”

The Afghan man and his son who lost their family are being looked after by the group they have travelled with since Iran. Hamid is with this group and he assures me he will help them contact the Red Cross once they reach Croatia. “I am with them, I will do it,” he says. “Whatever I can do, I will do.” 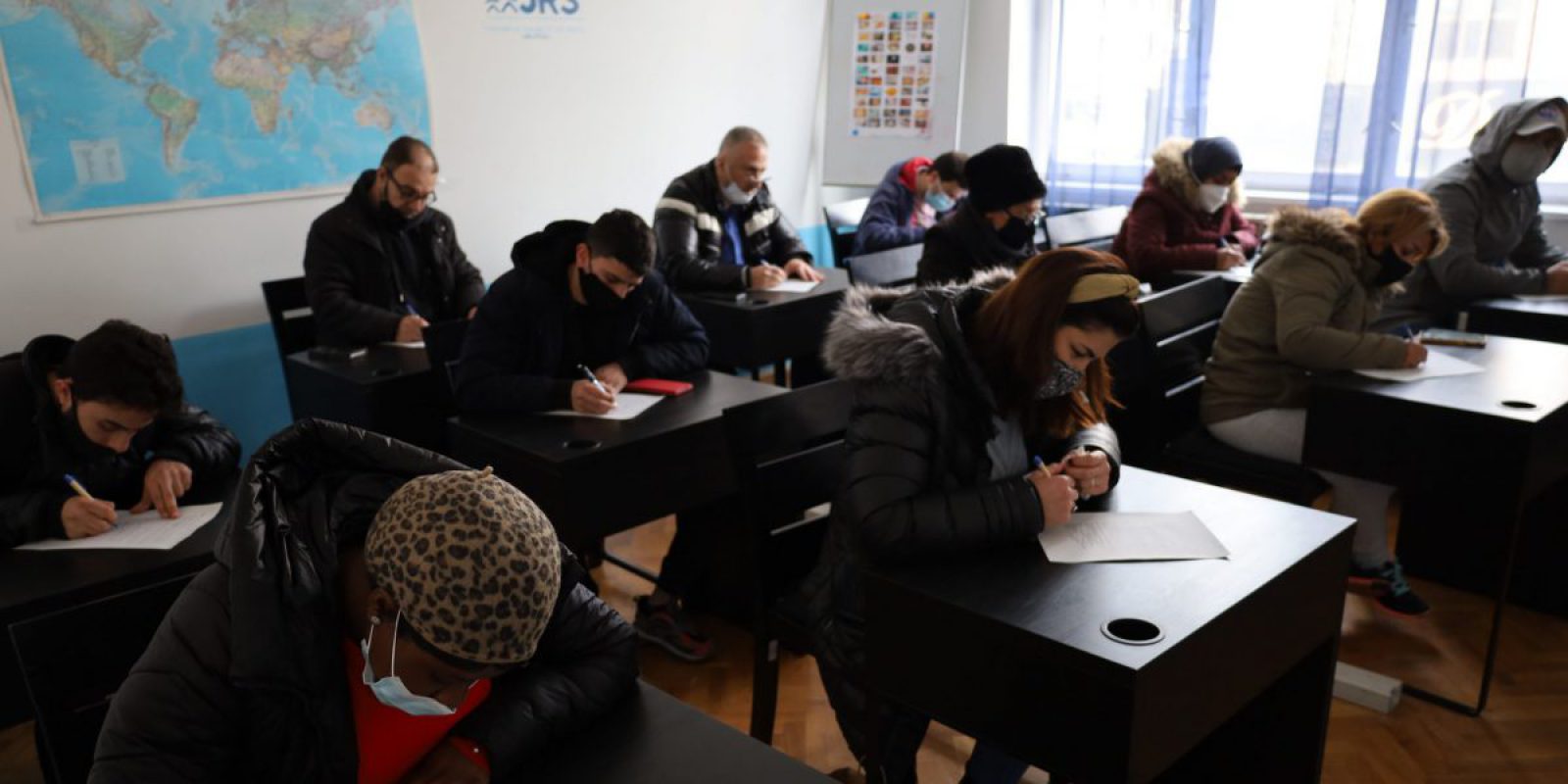