No.3 Listen to the story behind

“No one even listens to the story behind.” With these words, Iva, a young Croatian woman who works for Jesuit Refugee Service (JRS), neatly summed up the most glaring concern in Europe’s so-called refugee crisis.

Since the number of refugees coming to Europe, mostly via Greece, rose sharply last year, there has been a growing trend to stem their onward movement. Countries on the refugee route are using dangerously arbitrary criteria to determine who may and may not cross their borders.

As I travelled the route, I realised that to be allowed to continue their journey into Europe, refugees must come from the ‘right’ country of origin and name the ‘right’ country of destination when questioned at the borders. I did not see any effort to listen to individuals to determine their protection needs.

Since this weekend, border controls have become even more restrictive. Before, Syrians, Iraqis and Afghans were allowed to go through. Now Macedonia is accepting only Syrians and Iraqis with ID cards and passports, and is refusing to let Afghans enter its territory at all. As a result, an estimated 4,000 refugees are now stranded at the Greek-Macedonian border, while thousands more watch and wait in Athens.

Iva, who has been working with refugees at the Croatian border with Serbia since they started arriving last year, recalls a previous attempt to bar Afghans.

“When the crisis started last year, Afghan people had problems crossing the border. And the explanation was, ‘Afghan people are not here because of the war; the situation is OK, you know, there is no official war there’.”

This week’s sudden decision to deny Afghan refugees is deeply disturbing. I recall strikingly similar remarks passed by two whom I met on the route, which give an indication of what life was like back home. The first came from Ghodrat: “Every night, when we went to sleep, we didn’t hope to wake up alive.” Another young Afghan said: “When we left our homes to go to work, we didn’t hope to come back, because we could easily be killed by a suicide bomber or another attack.”

From Greece to Croatia, I met Afghan refugees who fled extremist persecution. Ghodrat was threatened because he is a Shia Muslim. Ali escaped because he did not want his family to pay the price of his job as a journalist. Hamid left nearly too late, after he was attacked because he worked as a translator for foreign NGOs: “I was walking to my university class, and a group of men came in front of me and said, ‘Translator stop’. They took my notebooks and stabbed me in my neck, chest, arms, all over.”

I also listened to people who had recently arrived from Pakistan, Iran and Morocco, and who had urgent protection needs. From Iran I met Reza, a Christian who fled the wrath of the authorities because he ran a home church. For two years, he was regularly called for questioning, a procedure that unfailingly left him physically and mentally bruised. When someone gave his persecutors the evidence they needed against Reza, he left Iran immediately. And I heard the story of a young couple that fled Iran after the husband was sentenced to some 150 lashes, a suspended prison sentence and an exorbitant fine because he served alcohol at their wedding.

The list goes on. When I was interviewing families at a Caritas shelter in Lesbos, a young man approached me and asked if he could tell his story. “I am gay and this is the reason I left Morocco,” he said. “People hit me, used bad words and bullied me, this happened so many times.” He shows me a scar on one side of his face, and picks up a glass to show me how it was done. Then he lifts his sweater and reveals the scar of a knife wound on his side. He was imprisoned twice under Morocco’s anti-gay laws. “I want to go to Germany but I know I won’t be able to,” he says wistfully.

The young man is probably right. He would almost certainly be summarily dismissed at the border with Macedonia because he comes from the ‘wrong’ nationality. What’s more, like many North Africans, he risks being immediately classified as an economic migrant. And here is something else I see: the lazy ease with which people are labelled as either “refugees” or “economic migrants”, with the latter all but demonized for having the temerity to turn up.

The problem with such facile classifications is that they can be unfair and inaccurate, and deny people the protection they urgently need. Given the lawless, violent, repressive and impoverished state of so many countries, the only way to determine if someone is a refugee is to listen to his story, to understand what led him to flee and what will happen to him if he goes back.

And here I turn again to Iva’s clear-sighted words: “Calling people economic migrants and forbidding them to cross borders is just closing your eyes to problems existing for so many years.”

Now stationed at Croatia’s Slavonski Brod transit centre, Iva has seen enough to convince her that people embark on this journey only because it is the best option they have.

“I really don’t think anyone would leave their whole life, their home, friends and memories unless they have to,” she says firmly. “We see people aged 80 years and more, people in wheelchairs… yesterday there was a man who had two heart attacks. No one takes such a risky way just to leave home. They want to see if they are lucky enough to get away from a situation of certain death to one where some will survive.”

If the refugees are not allowed to move on to a European country where they can feasibly claim asylum, their sacrifices might be in vain. At all costs, they want to avoid staying in Greece, and so many are forced to resort to smugglers again.

In early February, I took an overnight bus from Athens to the border with Macedonia. The bus stopped at a petrol station in Polykastro, a few kilometres from the border. Some of the passengers alighted and headed for a row of portable toilets at the edge of the bus park. Suddenly, they broke into a run and disappeared into the fields beyond.

On the bus trip, I got to know a man from the Pakistan-controlled part of Kashmir. He could not speak much English, but he shared biscuits and nuts with me, and showed me photos of his children back home. “Beautiful,” he said tenderly, his fingers stroking the images on his phone.

I hope that if he was one of those who made a run for it, border guards did not catch him. A report just released by Human Rights Watch claims that some people were badly beaten by guards when they were caught illegally in Macedonian territory and then pushed back to Greece.

You can hardly blame people seeking asylum for trying to leave Greece, which offers very bleak prospects. The country suffers from widely publicised economic woes and crippling unemployment, and is in no position to cater to large numbers of refugees. Applying for asylum is a long and difficult procedure, not easy to access, and conducted mostly via Skype. Those who don’t manage to apply could risk detention and deportation. The hardships facing refugees in Greece include destitution, homelessness and xenophobic attacks.

And so the hope to find life, “not a better life, just life”, might slowly beginning to die. The first person I met in Greece came from Pakistan. Faisal was homeless and queuing at Caritas in Athens, his belongings stuffed in a white plastic bag. He told me Greece “has nothing to give” and that he has been “killing time” for eight years. His asylum application was rejected and he was detained twice: “If you don’t have papers, they nail you inside for nothing.” Faisal assured me that all his hope was gone: “I’m dead inside. No fantasies or feelings like a normal person.”

And now my thoughts go to another Pakistani who has only just arrived in Europe to seek protection – Waqar, who fled dire threats because he is a Shia Muslim. His hope was buoyant when I met him at the JRS shelter in Athens, because he was confident that “European people” would save his family.

He said: “We like to watch National Geographic Channel, you know? And we see how people from the west love animals so much, so why not humans? We are sure Europeans care for the human rights of every person.”

Unfortunately, the decisions being taken by European countries in a bid to handle the refugee crisis appear to cast Waqar’s belief in doubt. Each country is quick to justify its actions, not least by pointing fingers at others, but ultimately there is no justification for the erosion of protection that we are seeing now at the borders. 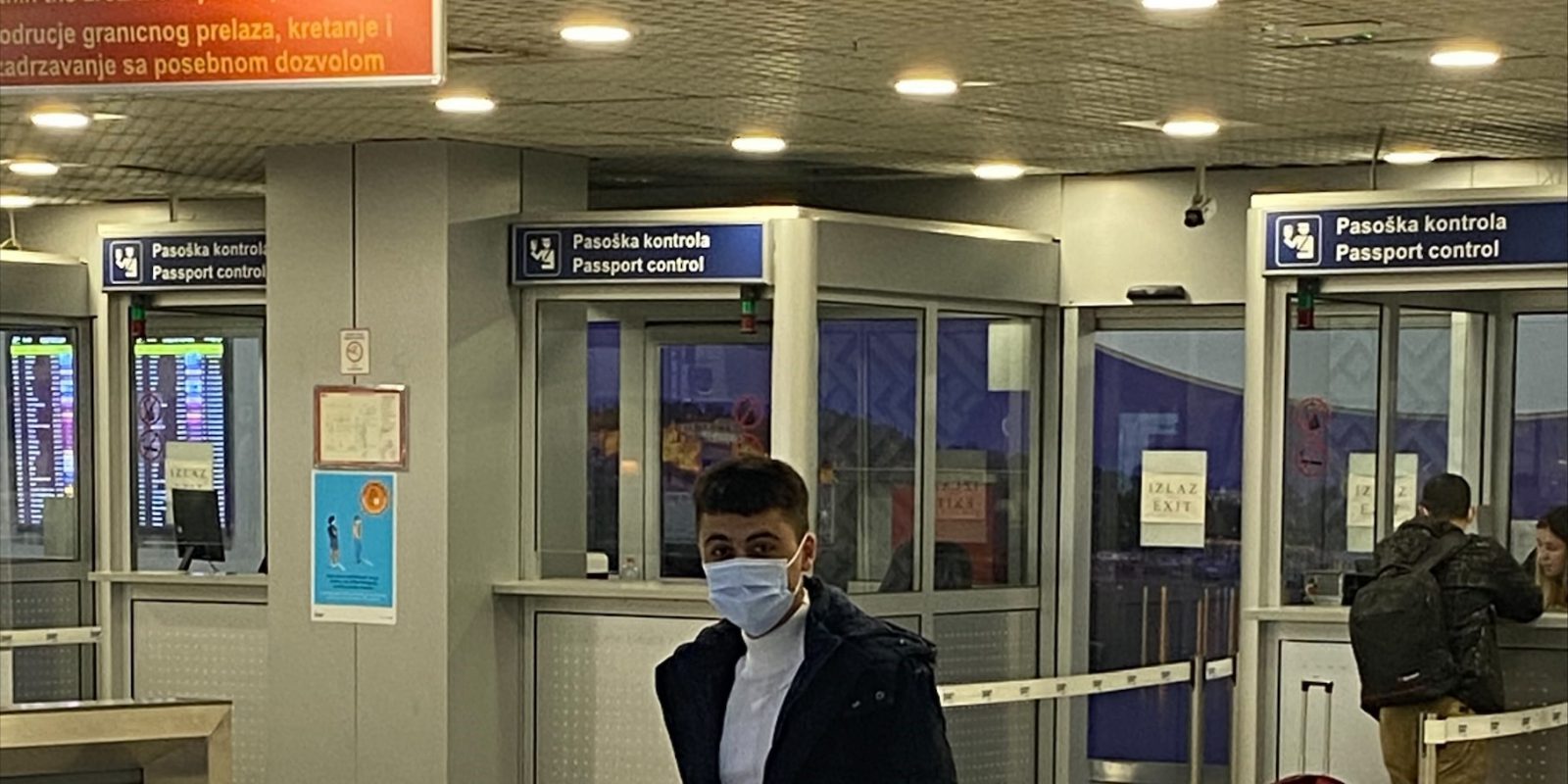 A success story of family reunification between Serbia and Sweden